Healthy nutrition: say no to GMO's

Are you ready for a food fight?! Sorry to disappoint if scenes from Animal House are running through your mind, because it's not that kind of fight to which I'm referring. The GMO conflict is waging on and at the risk of sounding overly dramatic, the very essence of our food and our health is at stake. One ongoing battle front for concerned American consumers is the call for GM food labeling. Unlike most other industrialized countries, the US doesn't label GM foods (1).

Just what is a GMO? -
I've posted about GM foods in the past, but in case you missed those posts (found here and here), I'll just briefly explain that GMO or GM are acronyms for Genetically Modified Organism. You may also see GE used, and this stands for Genetically Engineered. GM foods are the result of  taking specific selected gene(s) from one kind of organism and placing them into a related or unrelated organism (2). According to the World Health Organization (WHO), GMO's contain genetic material that "has been altered in a way that does not occur naturally" (2). In other words, not "present in, or produced by nature" (8).

"It's not nice to fool mother nature" -
What's wrong with the good, old, conventional, natural methods of breeding our crops? Well, it's seems they're just too time consuming and not very accurate. Never mind that this is how nature works. Biotechnology now allows scientists to modify plants in a lab in order to enhance certain desirable traits for crops such as drought tolerance and pest and disease resistance. For example, scientists can take a gene from a bacterium that is resistant to an herbicide like Roundup and insert it into a soybean plant cell to create a Roundup resistant soybean (1). This is viewed as a major benefit to farming because now farmers are able to plant these Roundup resistant GM seeds, known as "Roundup ready" seeds, and then use Roundup to kill the weeds without harming the crops. Are you sensing a theme here? The company that patented the Roundup ready seeds also patented the Roundup.

Well, I'm sure it will come as no surprise to you to learn that there's more to the story, but that's for another post. For now, it might be helpful to know how The World Health Organization answers the question of why foods are being genetically modified. After all, they are looking out for the world's health.  Here's what they have to say:


"GM foods are developed – and marketed – because there is some perceived advantage either to the producer or consumer of these foods. This is meant to translate into a product with a lower price, greater benefit (in terms of durability or nutritional value) or both." [emphasis added]

Hmmm... Let's briefly examine two of the reasons stated in the WHO statement for why GM foods are developed and marketed:
Is less expensive food of greater benefit nutritionally? -
A product with a lower price that has a greater benefit than a product with a higher price would be outstanding. I love a bargain, but I'm no economist. However, it's probably safe to say most of us would agree that getting something valuable for a lesser cost seems like a good thing. So, in an effort to make food cheaper and more abundant, cost effective and time efficient farming practices have evolved over the decades. GM crops are one result. Some advantages of GM foods are pest and disease resistance, herbicide as well as cold, heat and drought tolerance, and even greater nutritional benefit (3).  On the other hand, as a very wise biology professor once said, "for every yin, there's a yang", or put another way, for every benefit, there's a consequence.


Admittedly, the modernization and industrialization of farming practices have brought prices down significantly on some foods. But ultimately at what cost? Consider that the top GM crops are corn and soy which go into many processed foods (9). In fact, "thousands of products on supermarket shelves are made with ingredients from genetically modified crops" (9).  For example, high fructose corn syrup or soy protein is used frequently in the manufacture of prepackaged convenience foods. Yes, the benefits of these foods are that they're cheap and convenient, but there are consequences as well.

A 2006 report from the USDA Economic Research Service revealed some interesting statistical trends on the percent of income American's spent on food over the last 70 years. In 1930, Americans spent 24.2% of their income on food, compared with 9.5% in 2004 (4). Slate has broken it down further by food eaten at home and compared the percentages by country
(shown in the bar graph at right). The point being, Americans are paying a lower price for their food than at any other time in history and are also spending less than most countries. If, as WHO states, GMO's are being developed and marketed as products with a nutritional benefit, is the benefit being reflected in the public health? Are Americans healthier?


The fact is obesity rates in America are at the highest rates ever recorded and the diseases that correspond with being overweight/obese are increasing dramatically (5). You can check out the Center for Disease Control and Prevention's (CDC) interesting animated map here, that shows by state how obesity rates have increased since 1985. The map illustrates that during the past 20 years, "there has been a dramatic increase in obesity in the United States and rates remain high. In 2010, no state had a prevalence of obesity less than 20%. Thirty-six states had a prevalence of 25% or more and 12 of these states had a prevalence of 30% or more" (5).


Is the American penchant for inexpensive, fast, processed and prepackaged, GM foods coming with the unexpected cost of diminishing health and rising health care costs? According to the US Surgeon General, "Obesity is the fastest growing cause of disease and death in America" (6). "One out of every eight deaths in America is caused by an illness directly related to overweight and obesity" and this statement was made back in 2003 (6). Sadly, things haven't improved since then. Does the cheaper cost of GM foods balance out the health care costs of poor nutrition? According to the National Institutes on Health, "on average, people who are considered obese pay 42% more in health care costs than normal-weight individuals" (7). Is there really a lower price/increased nutritional benefit to GM foods?


GM food labeling-
Considering the above information, the critical factor in maximizing our potential for good health is good nutrition. This is only possible by having access to healthy foods and having the ability to make informed decisions about what foods we choose to eat. The fact that GM foods are not labeled in the US makes this impossible. Bearing in mind a 2008 survey, found here, which showed 87% of Americans polled felt labeling of GM food was necessary, it would seem that the US government would enact a GMO labeling policy.  This has been proposed, but unfortunately still not enacted and surely standing to benefit most from GM foods will continue to insist the labeling of GM foods is unnecessary. Considering the mounting research that shows evidence of harm from GMO's (10), it seems prudent to let our government officials know that we feel the labeling of our foods is highly important.

The following statement sums up succinctly the importance of making healthy food choices:


"Every day, several times a day, you make food choices that influence your body's health for better or worse.  Each day's choices are repeated over years and decades, the rewards or consequences become major. That being the case, paying close attention to good eating now can bring you health benefits later"  (5). 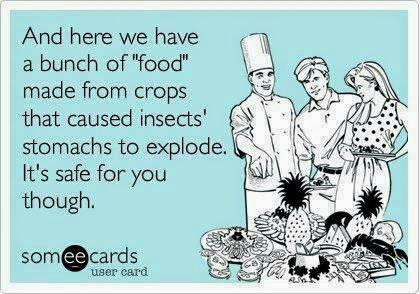 Tips to Avoid GMO's:
So, until GM food labeling becomes a reality, and this is a big question mark right now, you will have to do a little due diligence to avoid GMO's. You can limit your consumption of GMO's by making careful food choices. Here are a few suggestions for ways to avoid GM foods:
For more suggestions visit the True Food Shopper's Guide, which includes specific name brand non GMO foods to buy or GM foods to avoid. They even have an app available for your smart phone.  Lastly, please consider signing the petition found at the Institute for Responsible Technology. We need to let President Obama know that Americans want meaningful GM food labeling now, because the stance the US government seems to be taking to human consumption of GMO's is that they are innocent until proven guilty.  This principle may work for the justice system, but seems reckless when applied to our food supply, especially considering how absolutely crucial food is to our health and very survival.

Promote Your Page Too